Thank you, everyone, for your kind words and well wishes during the past two weeks. I appreciate them. We’ve been tying up loose ends related to Duane’s life and death, and we’re nearly finished with everything.

Things have been complicated slightly because I got sick. Duane’s extended family was passing around a nasty cold for much of April, and I managed to catch it the day after he died. It laid me low for several days. (And now, at this very moment, Kim is home sick from work with the same cold.) Fortunately, it’s not COVID.

Things have also been complicated because my mother’s health issues have recently reached a sort of crisis.

Last week, just days after my cousin Duane died, the memory director at Happy Acres contacted us. “We think you should consider placing your mother in hospice,” she said.

I was gobsmacked. Why?

Mom has been suffering from undiagnosed memory issues for over a decade, and she struggles with both anemia and diabetes. But these are all chronic conditions. She doesn’t have a terminal diagnosis. Why would she need hospice?

The past ten days have changed my mind.

Mom has lost fifteen pounds during the past month. She no longer shows much interest in food (except milkshakes). Her chronic digestion issues continue, as do her chronic urinary tract infections. Now, she’s losing the ability to walk. She’s begun to fall. Since the middle of April, she’s had four E.R. trips due to falling. She looks like she’s been in a brawl. 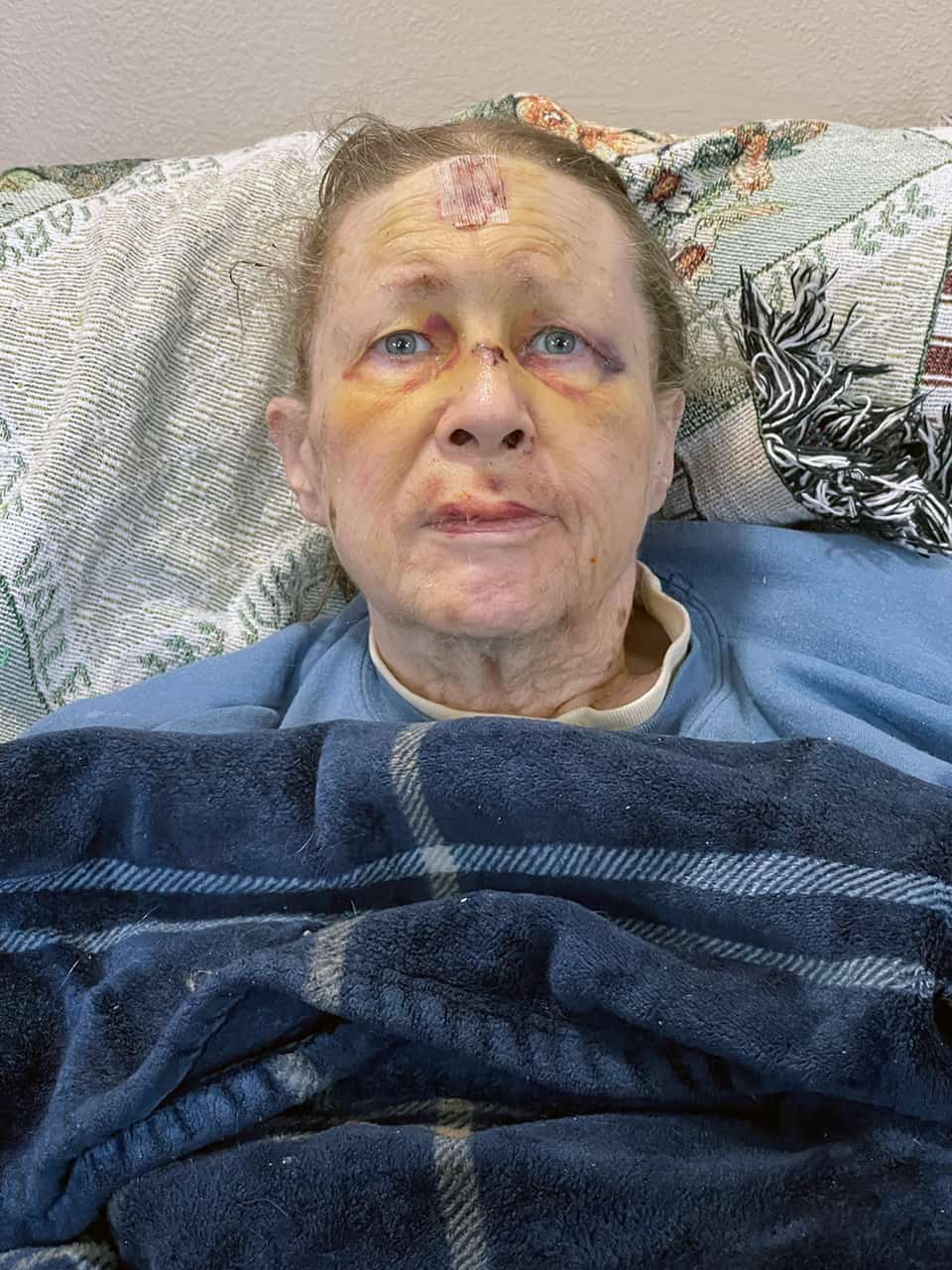 And, as of this week, Mom has begun experiencing incontinence. All this is to say that I’ve overcome my resistance to the idea that she should be in hospice. Maybe she should. It can’t hurt, and maybe it will help.

The doctors are still mystified as to exactly what’s going on with my mother. One huge barrier to diagnosis is that she is essentially non-verbal. If Mom has a strong emotion, she can communicate. When we were driving her home an appointment the other day, she croaked, “Burgerville.” She wanted a milkshake. If I show her photos or video of her cat (the cat that Kim and I have adopted), Mom brightens. “That’s my baby,” she says as she holds my phone.

Mostly, though, she says nothing.

She hardly responds to questions. Sometimes she’ll nod or shake her head or smile, but mostly she offers no reaction. (My sister-in-law took her to a doctor’s appointment last week. Steph says that Mom said nothing for the entire trip except one word when they got back in the car: “cashews”. She knew Steph had cashews in the car.)

Because Mom does not (cannot? will not?) tell us what she’s thinking or feeling or experiencing, all we and the doctors can do is act on what we observe. They’ve run tests to discover why she’s been vomiting blood for the past six months, but they’ve found nothing amiss. Same with the UTIs. Same with the memory issues.

“Look, I know this is frustrating,” her doctor told me during a one-hour video call in February. “And I wish we had some answers for you. Trust me when I say, however, that all of these tests are helpful. They may not tell us what’s wrong, but they allow us to rule out many possible problems.”

And so here we are today. Today, my brother and I signed the paperwork to admit Mom into hospice care. We don’t believe she’ll die anytime soon, but we also know that the assisted living facility isn’t equipped to send her to the emergency room six to eight times each month. It’s unreasonable to expect that.

With hospice, Mom will have a nurse visit two or three times each week. Whenever something happens that might otherwise send her to the E.R. — she vomits blood, she falls, etc. — a hospice nurse will be to her within half an hour to make sure everything is okay.

I’ll admit that there’s a part of me (a big part of me) that wants to move Mom in with me and Kim. We have the space. She could have the entire downstairs to herself, and she could be reunited with her beloved cat. Plus, I’ve just spent two months providing hospice care for my cousin, so I have a rough idea of what to expect.

Mom needs professional care. Duane’s situation was different. He was a healthy young(-ish) man at the end of his life. Mom is an older woman whose health has been declining for more than a decade. The staff of the assisted living facility know her and care for her. They have training that I don’t. So, I’ll let go of the idea that she should live with us…for now.

So Much To Do

I don’t expect that Mom’s situation will require as much time and attention as Duane’s did. We’re paying $7000 per month for trained professionals to give her the best possible care. Still, I expect to devote one day each week to her.

Meanwhile, there’s so much that I want (or need) to get done in other corners of my world. My life has been on hold for almost three months now. I’m eager to resume it. There are a lot of big projects looming on the horizon:

During the past ten days at home, I’ve either been sick or been dealing with issues that require my immediate attention. I’ve had no time to dive into these deeper projects. Now, as things settle, I want to pursue them in the order listed above.

That means the first two things I’ll be working on are my fitness and our home. It might take a week or two to get these projects moving, but once I have some forward momentum I can then resume my work on this website. I’m eager to do so! I have a clear vision of what I want Get Rich Slowly to be, and I wish that I could simply snap my fingers to make it happen. In reality, I know it’ll be a slow, slow transition. The sooner I can get it started, the better.

from Get Rich Slowly https://www.getrichslowly.org/one-thing-leads-to-another/
via IFTTT